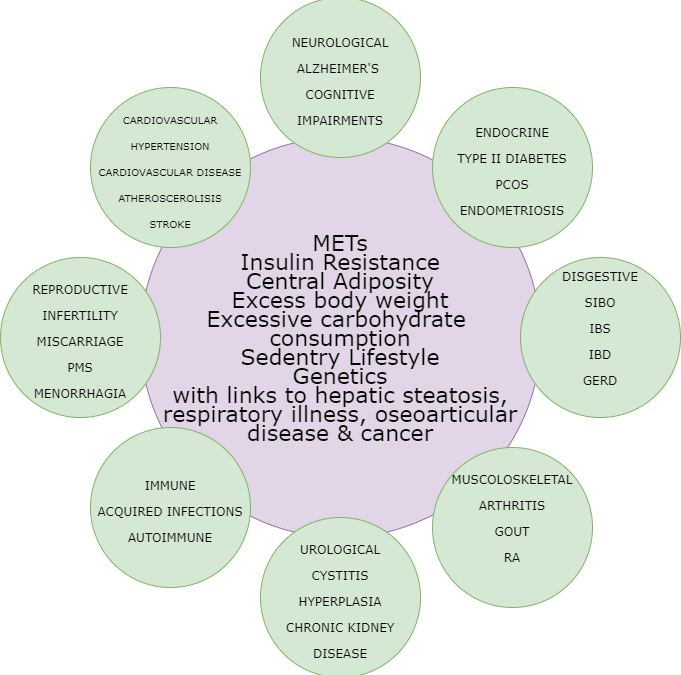 MetS has a multi-factorial cause, involving complex interactions between genetic make-up (see studies below), hormonal states and nutrition and lifestyle factors. People with MetS are at an increased risk of developing cardiovascular disease and/or type 2 diabetes.

Methylation is a process used in every cell in your body, probably a billion times or more a day and is utilised in liver detoxification, making processing and getting rid of neurotransmitters, changing and turning on & off bits of DNA, making, utilising and removing excess hormones, making & changing proteins, processing amino acids. It aids in detoxification & clearance of

We measure an amino acid called homocysteine to see how well methylation processes are working.

Single nucleotide polymorphisms, frequently called SNPs (pronounced “snips”), are the most common type of genetic variation among people. Each SNP represents a difference in a single DNA building block, called a nucleotide. Most commonly, these variations are found in the DNA between genes.

Polymorphisms, disruptions or variants in MTHFR genes result in lesser function and depending upon how many variants in the gene that be found and may result in 30% reduction in processes to up to 70% reduction of healthy function. There are quite a few variants; however the most commonly researched are A1298C and C677T.

(MTHFR mutations are linked to an array of conditions, not limited to cancer, cardiovascular disease, thrombosis, stroke, adverse pregnancy outcomes such as pre-eclampsia, still birth & neural tube defects and other neurological disorders such as depression & anxiety).

Disruption in methylation results in a build-up of homocysteine which in turn allows calcium to build up in the arteries and is related to heart conditions, strokes, such as mini-strokes that in time lead to dementia, cardio vascular events such as heart attacks and thrombosis (blood clots), but we have biochemical workarounds that assist your ability to function better.

Methylenetetrahydrofolate reductase (MTHFR) is a key regulatory enzyme in folate and homocysteine metabolism. Research performed during the past decade has clarified our understanding of MTHFR deficiencies that cause hyperhomocysteinaemia with homocystinuria, or mild hyperhomocysteinaemia. The cloning of the MTHFR coding sequence was initially followed by the identification of the first deleterious mutations in MTHFR, in patients with homocystinuria. Shortly thereafter, the 677C→T variant was identified and shown to encode a thermolabile enzyme with reduced activity. Currently, a total of 34 rare but deleterious mutations in MTHFR, as well as a total of 9 common variants (polymorphisms) have been reported. The 677C→T (A222V) variant has been particularly noteworthy since it has become recognized as the most common genetic cause of hyperhomocysteinemia. The disruption of homocysteine metabolism by this polymorphism influences risk for several complex disorders, which are discussed in various chapters throughout this book. In this chapter, we describe the complex structure of the MTHFR gene, summarize the current state of knowledge on mutations/polymorphisms in MTHFR and discuss some initial findings in a newly generated mouse model for MTHFR deficiency. (1)

An increased plasma homocysteine level was observed in those with the MTHFR C677T TT genotype and either low folate intake or low riboflavin intake. These data support that this polymorphism impairs the MTHFR enzyme activity and thus the conversion of homocysteine to methionine, especially in the presence of suboptimal levels of dietary folate and riboflavin, which are both necessary for the conversion. (2)

Folate is an essential B vitamin required for the maintenance of AdoMet-dependent methylation. The liver is responsible for many methylation reactions that are used for post-translational modification of proteins, methylation of DNA, and the synthesis of hormones, creatine, carnitine, and phosphatidylcholine. Conditions where methylation capacity is compromised, including folate deficiency, are associated with impaired phosphatidylcholine synthesis resulting in non-alcoholic fatty liver disease and steatohepatitis. In addition, folate intake and folate status have been associated with changes in the expression of genes involved in lipid metabolism, obesity, and metabolic syndrome.

We are beginning to understand the importance of folate supply in regulating hepatic lipid metabolism. The availability of new knockout models that have allowed for a much deeper understanding of how lipid metabolism in the liver might be affected by altered folate metabolism. It is clear that adequate dietary folate is required to support PEMT-dependent de novo PC synthesis in the liver and that disruptions in the metabolism of PC negatively impact hepatic lipid homeostasis via impaired lipoprotein secretion. In addition the maintenance of AdoMet concentration is crucial for liver function and the synthesis of other methylated compounds like carnitine, which influence hepatic lipid homeostasis. (2)

The availability of new knockout models that have allowed for a much deeper understanding of how lipid metabolism in the liver might be affected by altered folate metabolism. It is clear that adequate dietary folate is required to support PEMT-dependent de novo PC synthesis in the liver and that disruptions in the metabolism of PC negatively impact hepatic lipid homeostasis via impaired lipoprotein secretion. In addition the maintenance of AdoMet concentration is crucial for liver function and the synthesis of other methylated compounds like carnitine, which influence hepatic lipid homeostasis. (3)

Research has concluded that clustering of certain metabolic factors (e.g., abdominal obesity, dyslipidemia and elevated blood pressure), that define the metabolic syndrome (MS), has been documented to identify patients at increased risk for type 2 diabetes, as well as CVD and overall mortality. The MS is a growing health problem worldwide with an estimated prevalence in developed countries of 25–35% in adults, in parallel with the increasing prevalence of obesity and diabetes. Beyond metabolic factors, the genetic background may affect the risk of cardiometabolic diseases, especially in women in the post-menopausal period. Indeed, there are data suggesting the existence of significant gene environment interaction effects that make some individuals more susceptible to body weight gain or loss than others because of genetic differences, when exposed to an obesogenic environment. Moreover, body composition changes could be partially explained by genetic factors or by the interaction between genes and environment. Methylenetetrahydrofolate reductase (MTHFR), by catalysing the conversion of 5, 10 methylenetetrahydrofolate to 5-methyltetrahydrofolate, is a pivotal enzyme in folate metabolism that regulates the proportional usage of one-carbon units between methylation reactions and nucleic acid synthesis. The C677T MTHFR gene polymorphism results in a reduced specific MTHFR activity. The MTHFR gene polymorphisms were also found to be associated with body mass index (BMI)-defined obesity and lean mass, sustaining a linkage of body mass index (BMI) and lean mass to chromosome 1p36, where the MTHFR gene is located. (6)

Insulin resistance syndrome is one of the major contributors of metabolic syndrome, diabetes Type 2 and atherosclerotic cardiovascular disease and is characterised by glucose intolerance, hyperinsulinemia, dyslipidaemia, abdominal obesity and hypertension. Insulin resistance is a fundamental abnormality in the pathogenesis of type 2 diabetes and atherosclerotic cardiovascular disease (CVD). Insulin resistance disturbs the functions of insulin target organs, such as adipose tissue, which is related to glucose metabolism, lipogenesis, and adipokine secretion. Moreover insulin resistance is one of the major contributors of metabolic syndrome. A common mutation (677C to T; Ala to Val) in the methylenetetrahydrofolate reductase (MTHFR) gene is associated with decreased specific MTHFR activity and elevation of the homocysteine Results of this study showed an association between MTHFR 677C > T polymorphism with HOMA (homeostasis model assessment) and serum insulin level. The interesting result of this study was the effect of supplement intake on insulin resistance and this study showed a significant association between MTHFR polymorphism with insulin resistance. (7)

Metabolic syndrome (MetS) occurs as a cluster of metabolic abnormalities, which involve abdominal obesity, dyslipidaemia, hyperglycaemia, and hypertension. MetS contributes to cardiovascular morbidity and mortality. Body mass index, waist circumference, the waist-hip-ratio, systolic and diastolic blood pressure, fasting blood glucose, fasting insulin, triglyceride, total cholesterol, low-density lipoprotein-cholesterol, and homocysteine levels, and the homeostasis model assessment of insulin resistance were higher in the MetS group than in controls. The risk of MetS was higher for the TT genotype and T allele carriers than for the CC genotype and C allele carriers. With MetS, the TT genotype increased the risk of elevated blood pressure, fasting glucose levels, and triglyceride levels. Patients with MetS and the TT genotype showed more severe abdominal obesity, dyslipidaemia, insulin resistance, elevated blood pressure, elevated fasting glucose levels, and hyperhomocysteinaemia compared with those with the CC genotype. The authors Conclusions of the study In this population were that MTHFR C677T gene polymorphism may be a risk factor for MetS. (8)

Polycystic ovary syndrome (PCOS) is a heterogeneous endocrine disorder with typical symptoms of oligomenorrhoea, hyperandrogenism, hirsutism, obesity, insulin resistance and increased risk of type 2 diabetes mellitus. Participation of MTHFR polymorphisms in the regulation of the folate pathway or decreased activity of the homocysteine pathway has been revealed in a variety of pathologies, including Alzheimer’s disease, neural tube defects, acute leukaemia, colon cancer and PCOS. The results from the analysis of 14 articles involving 1478 PCOS cases from 16 distinct populations showed that the MTHFR C667T variant had different roles in the risks of PCOS in different ethnicities. The T allele significantly increased the risk of PCOS in Asians, had a protective effect in Caucasians and had no significant associations in Middle Eastern individuals. In humans, clinical evidence indicates that PCOS patients usually have an abnormal homocysteine level, which can return to the normal range with folic acid supplementation. The collective data implicate MTHFR as an ideal candidate gene for PCOS. (10)

Association between High Serum Homocysteine Levels and Biochemical Characteristics in Women with Polycystic Ovarian Syndrome compiled in a Systematic Review and Meta-Analysis was found. A total of 34 studies (with 1,718 cases and 1,399 controls) of homocysteine levels in PCOS were pooled in this meta­analysis. Significantly lower homocysteine levels were found in controls than in PCOS patients, regardless of the degree of obesity, IR, or androgen levels. Homocysteine levels in non-IR PCOS patients were significantly lower than those of PCOS patients with IR, confirming a correlation between elevated homocysteine and insulin resistance. CVD has various risk factors, such as elevated blood pressure, cholesterol, or glucose levels and smoking. Homocysteine, a sulfur-containing amino acid, is associated with an increased risk of atherosclerotic and thromboembolic disorders as well as hyperinsulinemia. Researchers have considered elevated homocysteine levels a “classical” risk factor for CVD. Hyperhomocysteinaemia may arise from nutritional deficiencies of folate, vitamin B6, and vitamin B12. Indeed, IR and obesity have been associated with lower serum vitamin B12 concentrations in PCOS patients. (13) Homocysteine levels in the blood may additionally be influenced by the activity of the enzyme methylenetetrahydrofolate reductase (MTHFR), the rate-limiting enzyme of the methyl cycle (15). MTHFR catalyses the conversion of 5,10­methylenetetrahydrofolate to 5-MTHF, a co-substrate of the reaction that converts homocysteine to methionine. This explains why individuals that have MTHFR variants with low activity levels often have higher homocysteine levels. (12)

The objective of the present study was to evaluate the simultaneous relationship between MTHFR methylation and MTHFR C6TT7 and A1298C polymorphisms with metabolic, inflammatory and oxidative stress parameters related to microvascular complications, diabetic retinopathy (DR) and diabetic nephropathy (DN) in diabetic patients. The hyper methylated methylation profile associated with the 1298AA genotype appeared to be connected to higher values of glycaemia, total cholesterol and LDL cholesterol. (14)